I’m really pleased that Elise & Archie’s wedding that I shot back in the Summer of 2016 has been featured on the Festival Brides blog.It’s safe to say that the Summer of 2016 had been a mixed bag as far as the weather was concerned. It was a lovely sunny morning when Elise and her friends got ready at her father’s house and there was a very chilled out air as bubbly was sipped and preparations began.

Time marched on and before Elise knew it, it was time to jump in the VW campervan (which doubled up as photobooth later on) which would take the bridal party to Holy Trinity Church in Ebernoe. After a beautiful ceremony it poured down which made for an interesting confetti tunnel but nobody cared, everyone was having far too much fun!

Reception was at a family owned farm and this is where the party really got started! Prosecco was pimped, the multitude of colourful bell tents as well as the main tipi for the party were all in place, and the canapes were ready for a ravenous 200 guests. Speeches took place in the tipi just in case it rained (again!) and following that the dodgems were unleashed. There was no sit down dinner as such, just a nice laid-back get something whenever you’re peckish kind of setup with food provided in the form of meatballs and a hog roast.

Music was there in many forms including a couple of sets from Portland UK and Martha Paton as well as DJ Andy Milner laying down some serious (and not so serious) tracks.

I would say fireworks were the perfect way to round off an amazing and unique day, but really they were just a chance for everyone to take a breather from the dance floor, before piling back in to dance until the wee small hours.

What a wonderful day! Thank you to Elise and Archie for having me there and to the Festival Brides blog for featuring my pictures! 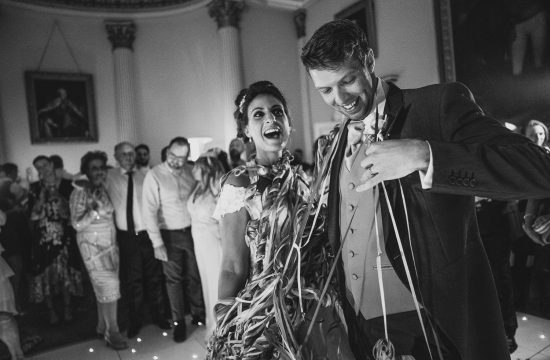 Featured on – ‘The English Wedding’ blog